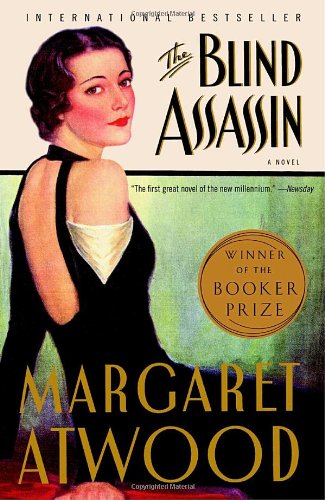 Winner of the Man Booker Prize in 2000, The Blind Assassin may be Margaret Atwood’s most famous novel on the international stage, but it’s by no means her only literary success in a career that has spanned more than half a century. Novelist, short story writer, businesswoman, mentor, environmentalist – there’s apparently nothing Ms. Atwood can’t do. Today, Margaret Atwood, Michael Ondaatje and Alice Munro form the triumvirate of Canadian literary royalty.

Here’s a snippet of writing gold from her award-winning novel:

“But thoughtless ingratitude is the armour of the young; without it, how would they ever get through life?…Without the protection of surliness and levity, all children would be crushed by the past – the past of others, loaded onto their shoulders. Selfishness is their saving grace.”

While not his most famous literary achievement, Michael Ondaatje is money in the bank when it comes to beautiful prose regardless of the work you’re reading. The selection below is from Coming Through Slaughter, Ondaatje’s debut work of fiction about legendary cornet player Buddy Bolden, and the same book that would go on to win Amazon.ca’s First Novel Award for 1976.

In a week marred (yes, marred) by Nobelgate, it still confounds me that Mr. Ondaatje has (a) not won a Nobel Prize in Literature to date, and (b) wasn’t  even in the running this year. (According  to an article by Russell Smith in last week’s Globe and Mail, “The Japanese novelist Haruki Murakami was the leader at 4/1, followed by people such as Syrian poet Adonis, Kenyan Ngugi wa Thiong’o and Albanian Ismail Kadare. The only American writers who were considered even a possibility were the cerebral and serious Philip Roth and Don de Lillo.”)

But without further ado, here’s just one example (among thousands) of how Michel Ondaatje bends the English language to his will, effortlessly, it seems, in ways mere mortals like myself could never hope to accomplish.

“Accidental lust on the bus carrying her new into his dead brain so even months later, years later, pieces of her body and character returned. What he wanted was cruel, pure relationship.” 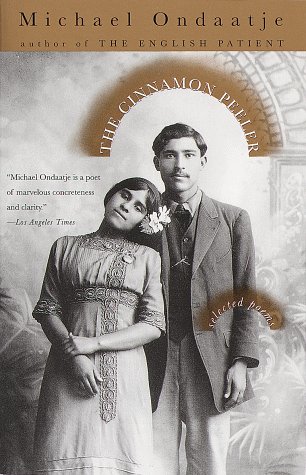 Considering that it’s National Poetry Day, I figured I should include one of my favourite Canadian poems. For those who know me, it will come as no surprise that my choice is a selection from Michael Ondaatje’s beautifully crafted lyric poem, The Cinnamon Peeler.

If I were a cinnamon peeler
I would ride your bed
And leave the yellow bark dust
On your pillow.

Your breasts and shoulders would reek
You could never walk through markets
without the profession of my fingers
floating over you.
The blind would
stumble certain of whom they approached
though you might bathe
under rain gutters, monsoon.

Here on the upper thigh
at this smooth pasture
neighbour to you hair
or the crease
that cuts your back.
This ankle.

You will be known among strangers
as the cinnamon peeler’s wife.

I could hardly glance at you
before marriage
never touch you
–your keen nosed mother, your rough brothers.

I buried my hands
in saffron, disguised them
over smoking tar,
helped the honey gatherers.

When we swam once
I touched you in the water
and our bodies remained free,
you could hold me and be blind of smell.

you climbed the bank and said

this is how you touch other women
the grass cutter’s wife, the lime burner’s daughter.

And you searched your arms
for the missing perfume

what good is it
to be the lime burner’s daughter
left with no trace
as if not spoken to in the act of love
as if wounded without the pleasure of a scar.

You touched
your belly to my hands
in the dry air and said
I am the cinnamon
Peeler’s wife.
Smell me.

Why Read the Same Book Twice?

Is reading a book for a second time akin to dating an ex- again? Like, what’s the point? You’ve been down that path, you know the score, it ain’t your first rodeo with it/him/her, so why bother?

As per the first question, no, it’s not like dating an ex- for the second time. To begin, a second run through a book lacks the drama of the latter (and the petty, petty fights). With respect to the other self-directed question, the point is in the details; reading a book for a second time is the difference between gazing at the stars with the naked eye and with a telescope. With an awesome piece of Galilean machinery, the stars really start to glitter.

My book club is nearing its 7th anniversary and over that time we’ve been fortunate to read some very good literature, both fiction and non-fiction alike. This month, however, one member decided to shake things up a bit (variety is the literary spice of life?). Instead of choosing a new title as we usually do, she asked everybody to pick one book we’ve already done and either go back and reread it (or read it for the first time if you happened to miss that month). Brilliant, says I.

That’s how I ended up choosing Kent Haruf’s Plainsong again this month. I purposefully chose this book because it’s not only a deeply soulful, thought-provoking read, but it’s sloooooooooooooow. My life is too hectic right now. I’m in the middle of my busy season for work and practically coming off the rails when not fighting deadlines 24/7. I started Plainsong once again yesterday and know that I have made the right decision. Haruf’s lyricism is so simple it can’t help but make you smile, especially when you consider the metaphor that I’ve cluttered and complicated my own life with all this bloody work. And wouldn’t you know it? I’m actually enjoying the book more this time through than I did the first time around.

However, I should point out that the experience is not always the same when you have a second kick at the can with books. For example, although The Wind-up Bird Chronicle is one of my favourite books and hugely impactful on my own writing, I didn’t enjoy it nearly as much the second time. Alternatively, The English Patient became more poetic the second time (and even better the third), Richler’s Barney’s Version  was even more piss-your-pants funnier the second time around, and my personal bible, Gibran’s The Prophet, has only become more poignant over the years with each subsequent read (I lost count at 10).

The thing is, you’ll never know how good a book can be a second time until you’ve tried it. Unfortunately, in this day and age of bucket lists, an addiction to newness, and the pressure to stay up on what’s hip and relevant, many of us don’t take the time to go back to the proverbial well and recall fond memories of stories that helped shaped us on our life journey. You should try it. I’m pretty sure you won’t regret the trip down memory lane in this epoch of Go! Go! Go!

All the Light We Cannot See

Winner of the 2015 Pulitzer Prize, Anthony Doerr’s All the Light We Cannot See is an immaculate work of art like few other novels published in recent years. Set during World War II, from occupied France to the farthest edges of Eastern Europe, All the Light We Cannot See is about the intersecting lives of a young boy entering the German Army early in the war and a blind girl living in France. However, it’s also a tale of greed and a German sergeant major’s quest to find the “Sea of Flames,” an incredibly valuable diamond said to both bring immortality to its possessor and death to the owner’s loved ones. At the same time, it is also a story of underground radio broadcasts that reminded me of the excellent German movie The Secret Lives of Others.

What is perhaps most alluring about this book is Doerr’s prose, which is nothing less than spine-tingling, and reminiscent of another master of the craft, Michael Ondaatje.

Here are some examples of Doerr’s literary magic from his multiple prize-winning novel:

“So how, children, does the brain, which lives without a spark of light, build for us a world full of light?”

“She walks like a ballerina in dance slippers, her feet as articulate as hands, a little vessel of grace moving out into the fog.”

“To men like that, time was a surfeit, a barrel they watched slowly drain. When really, he thinks, it’s a glowing puddle you carry in your hands; you should spend all your energy protecting it. Fighting for it. Working so hard not to spill one single drop.”

“To shut your eyes is to guess nothing of blindness. Beneath your world of skies and faces and buildings exists a rawer and older world, a place where surface planes disintegrate and sounds ribbon in shoals through the air.”

“I have been feeling very clearheaded lately and what I want to write about today is the sea. It contains so many colors. Silver at dawn, green at noon, dark blue in the evening. Sometimes it looks almost red. Or it will turn the color of old coins. Right now the shadows of clouds are dragging across it, and patches of sunlight are touching down everywhere. White strings of gulls drag over it like beads.”

My book club, Curling Was Full, read this book last month and in a rare moment of solidarity, everybody agreed that this was a very, very special book. The lesson to take away from this? Do yourself a favour. Go and get a copy of All the Light We Cannot See.