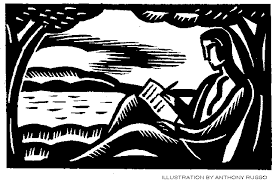 The New York Times just published an article on writing. Who the what the where?

I know. Shocking. And shocking results. Writing is good for you. Like eating avocados and pomegranates. Or spending time with friends and family. Where will this madness end!

Although the following quote does not read well (ironic considering it’s on writing), I think it captures the spirit of what writing in any form does to you: “When you get to that confrontation of truth with what matters to you, it creates the greatest opportunity for change.”

For centuries, the (very few) literate were encouraged to write. Part of this had to do with penmanship, and part of it had to do with – well – literacy. But it fueled some of the greatest thinkers of our world. Da Vinci scribbling notes about objects that were centuries beyond his time; Sylvia Plath wrote furtively to deal with mental health.; Dante wrote The Divine Comedy in the wake of losing his beloved Beatrice; Orwell wrote when up against the fight of his life, which he would lose, as he finished the final pages of 1984.

And in the end, each and every one of us wants a means  to express ourselves.