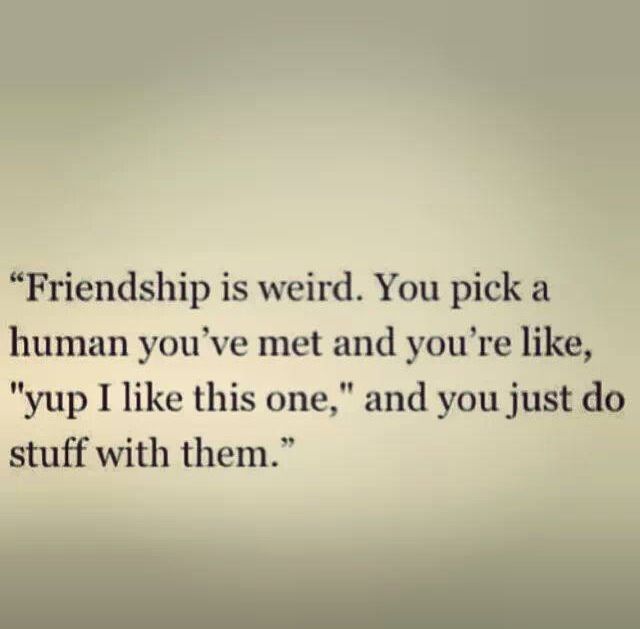 Simple and straight-to-the-point message above. Me likes.

In a piece titled “How Difficult Is It To Find An Aristotelian Friend?” Gregory Sadler (@philosopher70) exerts quite a bit of energy going through ancient texts, specifically Aristotle’s (or those about the Greek philosopher’s views), to figure out what it takes to develop the fullest sort of friendship. His own piece was inspired, at least in part, by Luciana Siracusano and her article in the Columbia Spectator titled “An Aristotelian friend is hard to find.”

Friendships, like human beings ourselves, have evolved over time. It would have been hard to nurture a pen pal relationship 20,000 years ago when we didn’t have any writing systems, pens, or paper, for example. Just as it would have been impossible for Aristotle to develop a meaningful friendship with kids on Facebook through his non-existent Interweb. (The Greeks only had Ataris, Vic 20s and Commodore 64s.)

For those more cerebrally inclined, do read the above articles, as it’s interesting to note how Team Socrates/Plato/Aristotle pretty much got everything right that they spoke about at length more than two millennia ago.

For me, I was more interested in the literary angle. What are the most enjoyable/enduring books about friendship? If you’re to believe Goodreads, all we need in this world is the complete works of J.K. Rowling. (Here’s the list of their top 459 books on the subject. Alternatively, here’s the Amazon Top 100 Books on Friendship.)

After doing a bit of research and putting my Friendship Cap on to consider this for a bit, I came up with my own list of books on the subject that I can either vouch for personally or trust the source it’s coming from. However, unlike most lists, this is in alphabetical order, so there’s no NUMBER 1 OF ALL-TIME! Just great reads that help us appreciate two of life’s real treasures simultaneously: books and friends.

Catcher in the Rye, J.D. Salinger

Of Mice and Men, John Steinbeck

The Lord of the Rings, JRR Tolkien

This list may not be perfect – not even close to fully explored – but at least it offers readers some different options to consider the next time you want to read a book about friendship…that was not written 2,500 years ago.

One response to “Friendship, Aristotle & Books (that espouse Aristotle’s views on friendship)”