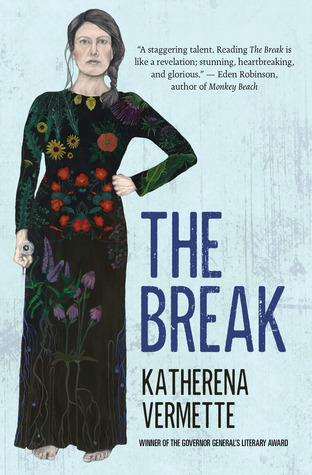 “He wants the simplicity of finality, but it’s never like it is in the movies. It always lingers on. Like a song that ends a beat or two before it’s supposed to, it feels like there should be more but there’s nothing, just an empty space and a long, fading echo.”
― Katherena Vermette, The Break

It’s shocking that this is Ms. Vermette’s first novel. The range, tone and maturity she displayed in handling one of the most sensitive subjects imaginable was breathtaking. Aside from being a compelling story (I say “aside” so flippantly!), what is most remarkable about the storytelling is that it’s done in such a balanced way; it would have been so easy to make men or the police the bad guys in this novel, but instead the author balances this with the flaws we all exhibit as friends, loved ones, and parents.

And, of course, there are literary nuggets of gold throughout the novel like the one above. I highly recommend The Break (as do the other curlers in my book club) if you’re looking for something serious, handled in just as serious a manner, and eye-opening to issues that many of us would rather run away from than confront.

Per the summary on Goodreads, here’s what you can expect from The Break.

When Stella, a young Métis mother, looks out her window one evening and spots someone in trouble on the Break — a barren field on an isolated strip of land outside her house — she calls the police to alert them to a possible crime.

In a series of shifting narratives, people who are connected, both directly and indirectly, with the victim — police, family, and friends — tell their personal stories leading up to that fateful night. Lou, a social worker, grapples with the departure of her live-in boyfriend. Cheryl, an artist, mourns the premature death of her sister Rain. Paulina, a single mother, struggles to trust her new partner. Phoenix, a homeless teenager, is released from a youth detention centre. Officer Scott, a Métis policeman, feels caught between two worlds as he patrols the city. Through their various perspectives a larger, more comprehensive story about lives of the residents in Winnipeg’s North End is exposed.

A powerful intergenerational family saga, The Break showcases Vermette’s abundant writing talent and positions her as an exciting new voice in Canadian literature.

Tagged as Katherena Vermette, Metis (Manitoba), Quote of the Day, The Break, The Break (novel)