The Ontario Book Publishers Organization is pleased to announce that submissions are being accepted until January 15, 2018 for the What’s Your Story? Short Prose and Poetry Competition for Emerging Writers.

This writing competition is part of What’s Your Story?, a series of events that celebrates the literary communities in four different community hubs: Etobicoke, North York, Scarborough, and East Toronto. In the spring of 2018, literary events will be held in each of these neighbourhoods featuring two winning emerging authors and their works (along with two established writers). There will be a total of eight winning emerging authors and eight winning established authors who have written works inspired by one of the four community hubs: Etobicoke, North York, Scarborough, and East Toronto. Short prose submissions must be between 1,300 and 1,500 words and poetry submissions must be a maximum of two pages.

Click here to learn how to submit your story for this contest.

A Filmmaking Workshop for Youth

A workshop series for newcomers, ages 18 – 29, who are interested in learning the craft of filmmaking. Apply today!

The Visual Artists Program provides support to visual artists who have a professional independent art practice for the creation/production of new work or the completion of works in progress.

Click here for more information and keep in mind the application deadline is September 14, 2017. 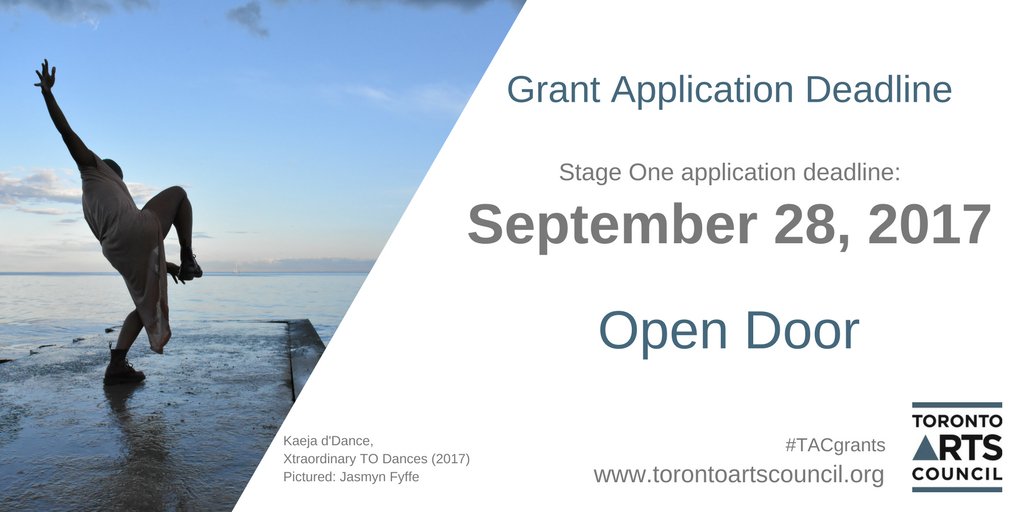 Do you have an arts initiative in Toronto worthy of funding? If so, then @TorontoArts may have some money for you. Click here to learn more.

Individual artists, organizations and collectives, this is your chance to apply for funding from the Toronto Arts Council (@TorontoArts) for its Animating Historic Sites initiative. The deadline is July 17, 2017 and may cover up to 100% of project costs. Click on the previous link to download full program guidelines and view past recipients.

Toronto Arts Council has partnered with City of Toronto Museum Services and the Evergreen Brick Works to provide opportunities for artists to re-imagine and animate six Toronto Heritage sites and the Brick Works through engagement with their histories, local contexts, and communities.

TAC has two distinct funding envelopes: 1) Arts Discipline funding (e.g. discipline-specific project grants and operating grants) and 2) Strategic funding (e.g. Animating Historic Sites, Animating Toronto Parks, Artists in the Library, etc.). Applicants are eligible to receive only one grant from each funding envelope per calendar year. Applications to the Animating Historic Sites program fall within the Strategic Funding envelope. Any other Strategic Program grants must be complete with a final report filed and approved to meet eligibility criteria. (*Please note: Newcomer and Refugee Artist Mentorship grants do not fall under the category of Strategic funding).

The Toronto Arts Council (@TorontoArts), in conjunction with the  Ontario Book Publishers Organization, is holding a short prose and poetry competition for emerging writers.

To qualify, you must be 16 years of age or older, a resident of Toronto and have no book publishing credits. And the best part is that there are cash prizes of $1000 for each of the four winners.

Entries must be received electronically by May 1, 2017 at 11:59 pm Eastern Standard Time to jury@obpo.ca

Think you can capture the Six in six words? Okay, that question’s kind of laden with all sorts of cheese over it, but the point doesn’t change: If you’re a Torontonian, a T Dotter, and a Muddy Yorker tru and tru, then take a look at the City of Toronto’s website on this interesting artistic endeavour.

A brief introduction can be found on the above link:

My City My Six (MCM6) is a participatory public art project that will reveal Toronto and its residents in celebration of Canada 150, six words at a time. From January through May 2017, the My City My Six project will ask Torontonians of all ages and backgrounds to share something essential about themselves in six words.

Based on the six word story concept popularized by Smith Magazine, this project invites Torontonians to write and contribute six words that best tells their story.  My City My Six will culminate in a city-wide exhibition in the public realm in the fall of 2017, showing the diverse lives that collectively make up this great city at this moment in time.

Send in your story by email to culturalhotspot@toronto.ca and include your first name, the name of your neighbourhood and your age. Anonymous submissions are fine too.

You can send in your suggestions up until May 31, 2017, and although there is no set cap on how many witty six-word “stories” you submit, I was told by a City official that up to five submissions would be “reasonable.”

Good luck. Hopefully you’ll see your final product up around the city sometime next fall.