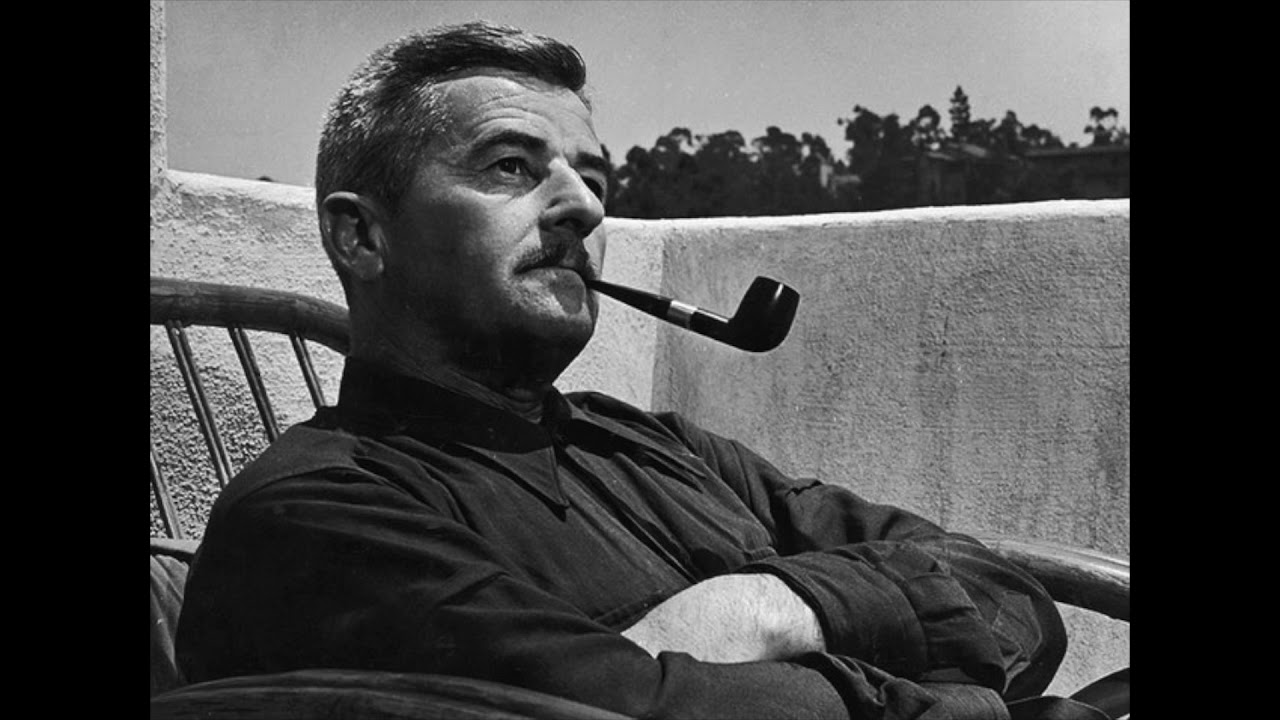 Maybe a good ol’ pipe is all I need)

Emily Temple has an interesting piece in Literary Hub called “20 Pieces of Writing Advice from William Faulkner: “Don’t be ‘a writer’ but instead be writing.”

What I love about this is that it can be applied (mostly) to everyday life and the challenges we face as partners, parents, employees…human beings. Here’s a snapshot of some of Mr. Faulkner’s choice thoughts:

On how to approach writing:

Keep it amateur. You’re not writing for money but for pleasure. It should be fun. And it should be exciting.

Teach yourself by your own mistakes; people learn only by error.

On what makes a good novelist

He is completely amoral in that he will rob, borrow, beg, or steal from anybody and everybody to get the work done. . . . Everything goes by the board: honor, pride, decency, security, happiness, all, to get the book written.

I think anyone that spends too much of his time about his style, developing a style, or following a style, probably hasn’t got much to say and knows it and is afraid of it, and so he writes a style, a marvelous trove.

On writing towards the truth:

Our tragedy today is a general and universal physical fear so long sustained by now that we can even bear it. There are no longer problems of the spirit. There is only the question: When will I be blown up? Because of this, the young man or woman writing today has forgotten the problems of the human heart in conflict with itself which alone can make good writing because only that is worth writing about, worth the agony and the sweat.

All of us failed to match our dream of perfection. So I rate us on the basis of our splendid failure to do the impossible.

On what a writer needs:

[T]he only environment the artist needs is whatever peace, whatever solitude, and whatever pleasure he can get at not too high a cost.

On the writer’s essential toolkit:

A writer needs three things, experience, observation, and imagination—any two of which, at times any one of which—can supply the lack of the others.

On the best training for writing:

Read, read, read. Read everything—trash, classics, good and bad; see how they do it.

And maybe the best piece of advice of all.

On also getting a job:

Don’t make writing your work. Get another job so you’ll have money to buy the things you want in life. It doesn’t matter what you do as long as you don’t count on money and a deadline for your writing.

Tagged as "20 Pieces of Writing Advice from William Faulkner: "Don't be a 'writer' but instead be writing.", @lithub, advice from Faulkner, advice on writing, Emily Temple, Literary Hub, william faulkner

The Hockey of Literature

David Davis wrote an awesome piece in the Los Angeles Review of Books (LARB) called “The Puck Stops Here: A Hockey Lit Survey.” If you thought man’s greatest pastime (reading) couldn’t join forces with our greatest sport (hockey, no, not the field variety), then think again.

The strange (fascinating?) thing about this is has to do with the principal character in this LARB piece, William Faulkner, the good old Southern boy who was more interested in war and riding horses than anything to do with a rubber puck and a bunch of Canadians skating around an ice surface in between beating each other up.

But all that changed, apparently, when a little-known magazine at the time, Sports Illustrated, sent Faulkner to a Rangers-Canadiens game at MSG in the winter of 1955. As Faulkner would later write:

“[The game] seemed discorded and inconsequent, bizarre and paradoxical like the frantic darting of the weightless bugs which run on the surface of stagnant pools. Then it would break, coalesce through a kind of kaleidoscopic whirl like a child’s toy, into a pattern, a design almost beautiful, as if an inspired choreographer had drilled a willing and patient and hard-working troupe of dancers — a pattern, design which was trying to tell him something, say something to him urgent and important and true in that second before, already bulging with the motion and the speed, it began to disintegrate and dissolve.”

From Faulkner’s impressions of players who “would not emerge like the sweating barehanded behemoths from the troglodyte mass of football, but instead as fluid and fast and effortless as rapier thrusts or lightning ” to the children’s classic, The Hockey Sweater, to the sport’s Golden Age, Summit Series, Philip Roth and Don DeLillo – this article has it all!

They were all alcoholics at one time, many of them for life, some of whom actually died as a direct result of their affliction.

Frighteningly enough, the above list only represents some of the greatest names in English literature over the past 150 years. This raises another alarming question: Is a grossly unhealthy dependence on alcohol necessary to become a great and prolific writer? Should writers follow Hemingway’s advice when he once mused, “Write drunk; edit sober”? While a humorous, pithy, and catchy suggestion, was Papa onto something?

Fortunately, the answer is a resounding NO!

Just ask Stephen King, who since quitting drugs and drinking has produced arguably his best work; David Mitchell, who’s an insanely responsible person and health nut; Murakami Haruki, who quit smoking and left his heavy whiskey-drinking days behind long ago at his former Tokyo bar and now takes solace in jogging, not the bottle. I’m pretty sure Margaret Atwood and Michael Ondaatje are on the straight and narrow, too. Then there’s Isaac Asimov, Anne Rice, and Stephenie Meyer, each famous as a writer for different reasons, but all of whom are teetotalers (abstinent from alcohol).

Over the past few weeks, I’ve been binge-watching Intervention Canada, an intense documentary that spends a few days following drug and/or alcohol addicts (and by “addict” I mean so far gone in most cases that it’s actually difficult to watch sometimes) before facilitating an intervention and offering treatment at many of Canada’s top treatment facilities. (Sidebar here: is it just me or are all the best rehab centres in Canada located in British Columbia?)

While watching an episode of IC a few days ago, I was struck by the courage one young woman summoned up when coming to grips with her demons, so I decided to write it down:

“I do not know what it is to be brave. And I do not know what the word bravery means to other people. What I do know is that strength is brought about by confidence. What I do know is that hardship fosters understanding. I believe kindness and thoughtfulness are the keys to ensuring a successful life. As I move forward, and embark on a new life, a life free of alcohol, free of pain, a life free of poison, I take to heart what the word bravery might actually mean.”

Scientists and philosophers have long tried to determine what exactly leads to genius. I think the only thing people can agree upon is that there is most definitely a biological factor; some people are simply blessed with a formidable brain. But it’s not all nature, I think. There is most certainly a nurture component – hard work, dedication, and a passion for a particular field of knowledge. At the same time, I feel equally confident saying that crutches like OxyCoton, meth, heroin, crack, whiskey, gin, beer, etc. (ad infinitum) will get a person nowhere, especially an artist like a writer, who already spends enough time alone and possibly dredging up memories and emotions that could sink even the strongest person if not handled with extreme cerebral care.

So if you’re interested in getting started on that story you know you have in you, or perhaps you’re brash enough to want to become a professional writer (ha ha ha ha ha…that’s just dumb and dumbly), do so with a cup of Joe or a mug of herbal tea, preferably in the hours before the sun rises, and you (and your liver) will be grateful for the decision in the years to come.