Ostensibly this is a site about books and literature and other blah blah blah interesting things. But every once in a while, I’ve got to just run with the ball, all the way out of the stadium like an F. Gump on ‘roids, and somehow make it work.

Earlier, while searching my Vic 20’s extensive catalogue of memorable things that even more memorable people have uttered over the ages, I stumbled upon fashion (always my secret weapon), and was amazed to learn that pretty much every quote was not only on the mark, but eloquently stated (irony/destiny?).

So without further ado, here are some old and new classics on the subject…

Never use the word ‘cheap’. Today everybody can look chic in inexpensive clothes (the rich buy them too). There is good clothing design on every level today. You can be the chicest thing in the world in a T-shirt and jeans — it’s up to you.”
― Karl Lagerfeld

“Every generation laughs at the old fashions, but follows religiously the new.”
― Henry David Thoreau

“He’s always asking: ‘Is that new? I haven’t seen that before.’ It’s like, Why don’t you mind your own business? Solve world hunger. Get out of my closet.”
― Michelle Obama

“The most beautiful makeup of a woman is passion. But cosmetics are easier to buy.”
― Yves Saint-Laurent

“[how can anyone] be silly enough to think himself better than other people, because his clothes are made of finer woolen thread than theirs. After all, those fine clothes were once worn by a sheep, and they never turned it into anything better than a sheep.”
― Thomas More, Utopia

“A girl’s got to use what she’s given and I’m not going to make a guy drool the way a Britney video does. So I take it to extremes. I don’t say I dress sexily on stage – what I do is so extreme. It’s meant to make guys think: ‘I don’t know if this is sexy or just weird.”
― Lady Gaga

“There is one other reason for dressing well, namely that dogs respect it, and will not attack you in good clothes.”
― Ralph Waldo Emerson

“Speed eliminates all doubt. Am I smart enough? Will people like me? Do I really look all right in this plastic jumpsuit?”
― David Sedaris

“You can never be overdressed or overeducated.”
― Oscar Wilde 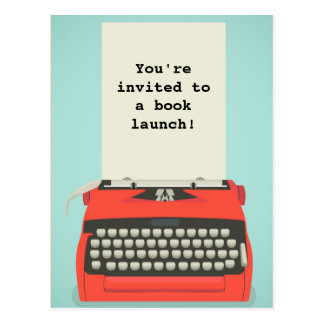 Launching a launch. Ha ha ha. That’s funny. (NOTE: Sedaris, you got nuttin’ on me! Oh, and I’ll be here all weekend…maybe longer.)

Seriously, though, a book launch is no laughing matter, doubly so if you’re handling it all on your own. If you’re going to do it right, it takes a lot of planning, hard work and – sadly – some dinero. I wrote a bit about the whole thing in a post (YOLO: You Only Launch Once) and more generally through a page on the self-publishing process.

However, Cecilia Lewis (@ceciliaedits) over at Lewis Editorial: Bringing Stories to Life also has some useful advice for indie authors, especially those about to go to their first rodeo, in a post called “7 Tips for a Successful Book Launch.”

I concur with everything Ms. Lewis has to say and would add one thing to No. 7: Celebrate. I’ve done five book launches/signings in two countries and in two languages and I can tell you this: The more formal and structured and icky you make it, the less enjoyable it is for everyone. I think book launches should be run like a good book club; people need to want to be there, not because of the moral imperative (“Come on, Mom! It’s one afternoon away from your underwater crochet class!”; “Bro, like, I’ll buy you that custom back waxing that can skip over your BackAc if you come for at least, like, five minutes.”; “Norma Ray, you’re my best friend in the whole wide world and I promise to teach you how to talk pretty one day just like DSed.”), but because it’s going to be a good time (i.e. free booze), they can meet other interesting human beings (no doucheags in fancy suits or ascots), and if they’re a writer/artist themselves, they can network without looking desperate (sort of an oxymoron, sort of not).

To all those out there about to embark on their first book launch, I wish you all the best. One last piece of advice: Practice signing your name a bunch of times in a row and try not to make it look like chicken scratch the 10th time around (cough), because readers like to show off their signed copies with something legible (cough cough) that does not resemble Chinese characters that got caught in the washing machine on the perma-spin cycle (cough cough cough).

Yep, it’s official: David Sedaris has a new book out called Theft by Finding: Diaries (1977-2002). That, of course, is good news; when it comes to random narratives about everyday life, you’d be hard-pressed to find anyone today writing in the English language who not only writes with more panache, but can also narrate these stories out loud and in person better than anyone. Don’t believe me? Check out his reading of this classic story, “Six to Eight Black Men,” one of many gut-bustingly (you’re welcome for the new addition, OED)hilarious stories from his book Dress Your Family in Corduroy and Denim.

Patton Oswalt (@pattonoswalt) wrote a great review of the book for The New York Times titled “David Sedaris’s Diaries Track a Path From Struggle to Success.” However, if you want to listen to the man himself wax poetic about Theft by Finding, you can listen to David Sedaris here.

If you’ve never read anything by the American author David Sedaris, you’re missing out on a vital piece of modern humour and satire. Ever since his first essay was broadcast on NPR in 1992, Sedaris has risen to staggering fame in a literary genre all his own. He has become as well known for his unique writing style as he has for his one-of-a-kind voice when he carries out readings both in public and on the radio.

The below passage from his book Me Talk Pretty One Day may seem a little crass, but in honour of the Year of the Rooster, I present the following quote on perseverance and self-preservation:

Certain motherfuckers think they can fuck with my shit, but you can’t kill the Rooster. You might can fuck him up some times, but, bitch, nobody kills the motherfucking Rooster. You know what I’m saying?

Although most of his stories have at least a kernel of genius, for me his funniest story has to be “6 to 8 Black Men,” which you can watch David Sedaris read here on YouTube.

Tagged as 6 to 8 Black Men, David Sedaris, Me Talk Pretty One Day, NPR readings, Quote of the Day

Kevin Bacon, pack up your grits. You ain’t got nuttin’ on Maria Semple. Per an article on slate.com, Dan Kois and Andrew Khan were struck with an idea upon publication of Semple’s latest book: Why not ask the Seattle-based writer what she thinks is the funniest book by a living writer.

The “daisy chain of hilarity” led them to ask those authors named by Semple what their list of funniest books by living authors was – and the results are very cool, including renowned writers like David Sedaris and Junot Díaz.

Personally, the two books which have actually made me cry out loud I laughed so hard were Hunter S. Thompson’s Fear and Loathing in Las Vegas (though Thompson is no longer alive) and Philip Roth’s The Great American Novel (and I have no idea how Sabbath’s Theater made the slate.com list!).

As a side note, click here to see some of the funniest book titles known to humankind. Just make sure you’re wearing diapers or reading this in a bathtub, as you may unwittingly urinate on yourself.

If you have a suggestion for funniest book by a living/dead writer, feel free to drop me a note in the Leave a Reply box.