In between sweeping fictional epics and treatises on a broad range of subjects, from the origin of modern phytoplankton to explaining theories of economic growth, I like to get my inner Child on. Lee, that is.

As I await my Amazon order due next week (Manhattan Beach, Don Quixote), I have a few days to let my mind wander, so I let it wander all the way to the local library yesterday, where I picked up Make Me, Lee Child’s 8 millionth addition to the Jack Reacher Library for Altruism, Public Safety & Community Affairs.

And for reasons that escape me, I can’t get enough of JR/Lee Child. Or, as Murakami Haruki is super-enthusiastically quoted as saying on Mr. Child’s website, “I like Lee Child!” Good on ya, Haruks! Talk about a ringing endorsement. Maybe someone should have looked at “The Language of Love” before translating that one.

I tried explaining the appeal of Lee Child to my mother last night, but fear I didn’t do a very good job.

“So I’m about 120 pages in,” I began, “and essentially nothing’s happened so far. JR’s in the middle of nowhere Oklahoma, there’s been one minor fight, no deaths, one gun scene, a complete lack of blood, and a mystery tied to the evolution of wheat.”

“Similar, but totally opposite. Like shredded wheat, yet not yet shredded yet. Anyway, Lee Child’s greatest description thus far into the book is of a train station and a mahogany bench. In a town called Mother’s Rest.”

“Anywho, I’m not kidding about the slowness of it. Best of all, if you asked Matt to edit this as a manuscript, he’d have a heart attack and lose much of his head hairs; there’s alliteration all around, poor man’s poorly punctuation, dialogue bleeding from one character to the next (how many people really say ‘a million to one gets you…’ so often?), and so on and so forth.”

“So why do you like him so much?” my mom asked, equally fascinated and repulsed by my answer. 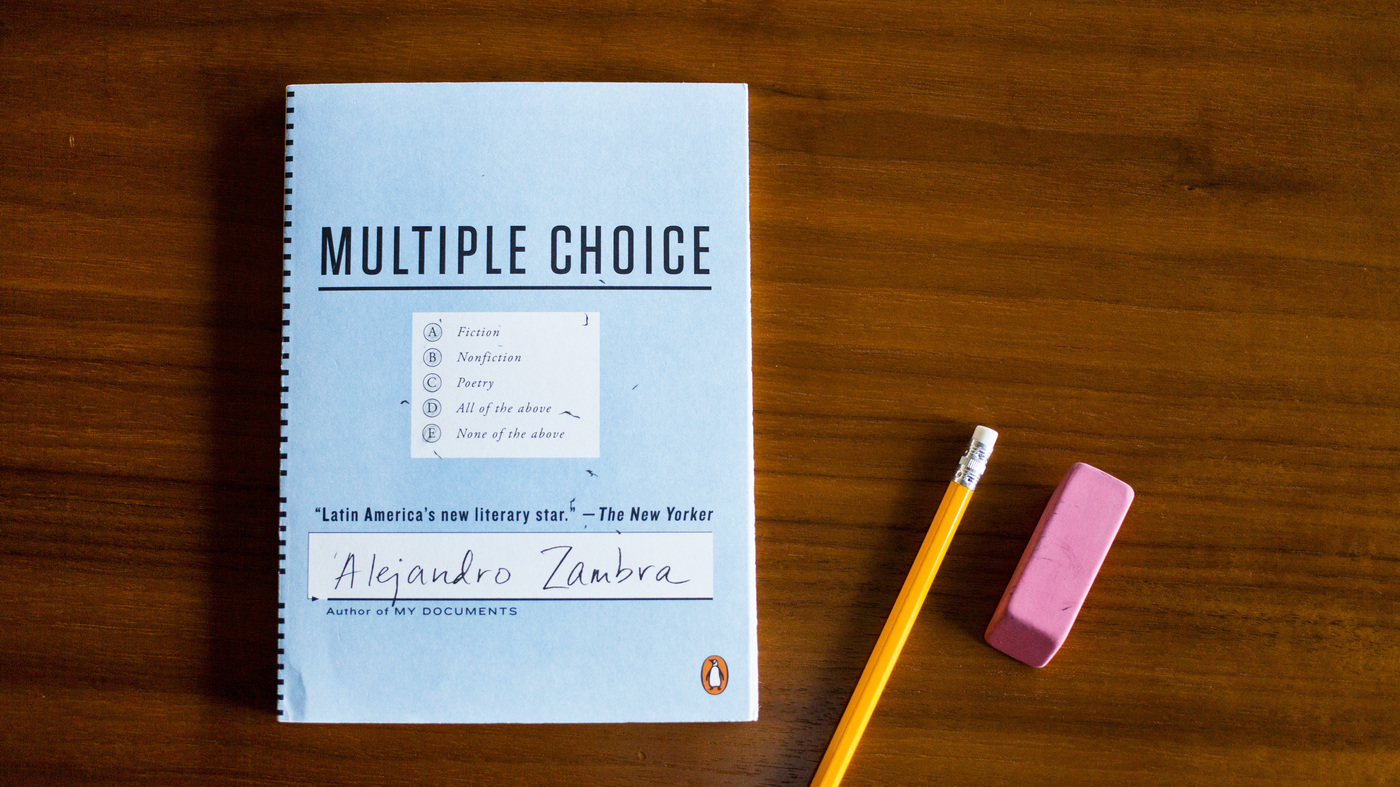 I’ve read books where I had to keep a dictionary close at hand (The Name of the Rose) or a notebook to jot down lyrical prose (The Prophet, The English Patient), but with Alejandro Zambra‘s Multiple Choice, you do actually need a pencil and eraser to get through this:

(D) All of the above

(E) None of the above

I’m going to go with (F) Gimmicky. Now, I should point out that “gimmicky” does not necessarily mean bad, boring or trite. On the contrary, I think of the Choose Your Own Adventure series and how – gimmicky though they are in their format – each book is actually fresh, vibrant and engaging. (Someone actually referred to Multiple Choice as an “existential Choose-Your-Own-Adventure novel,” which I could not find more egregiously misleading.)

Even if you enjoy taking tests, do you really want to be going back and forth constantly between the answer index in the back of the book and the page you’re reading? Doubly so while you’re taking the subway to work in the morning or getting sleepy at night and lying in bed?

Perhaps it’s more pertinent to ask where any semblance of tension is throughout the prose-poetry novella (option (G)?). Or the lack of any empathy evoked by a wholly absent protagonist.

In short, a book should not be judged on its “newness” alone, but also by its literary merits, even if it’s simply because it’s a page-turner. For example, through their respective Jack Reacher and Robert Langdon series, Lee Child and Dan Brown manage to capture our imagination, as puerile (or gimmicky) as the writing may seem at times.

While I’m always happy to have formed an independent opinion after reading a book for myself, I can safely say that if you’ve already got another book on your shelf waiting to be read, you can skip passing Go on this one and not collect the $3 I received for reselling Multiple Choice to a used bookstore last week.