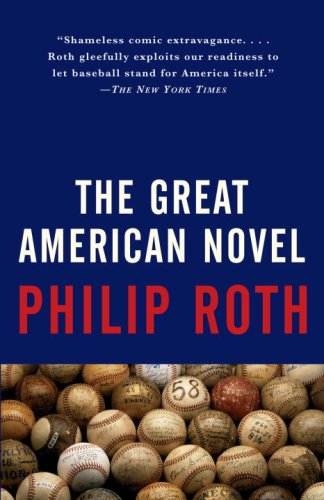 Not only is The Great American Novel my favourite Philip Roth novel, but it’s without doubt one of the funniest and most satirically biting stories I’ve ever read. You don’t even have to like baseball (the backdrop to the story) to appreciate the plot; you’ll be too busy wiping away your tears of nitrous oxide-induced laughter to care about “Who’s on First?”

The year is 1943. America is deep into the Second World War, but the country’s pastime must go on! Thus is borne the Patriot League (a fictional baseball league in the U.S.) as a nationwide communist conspiracy attempts to erase its history because it’s become a fully open communist organization.

Roth, who like Alice Munro has “retired” from writing, may have published this book in 1973, and it may be set over 70 years ago, but its message still rings true today. Furthermore and therefore moreover, it’s still a great read all these decades on.

As proof positive of said claim, savour this passage:

“America?” said Gamesh, smiling. “Roland, what’s American to you? Or me, or those tens of thousands up in the stands? It’s just a word they use to keep your nose to the grindstone and your toes to the line. America is the opiate of the people.”

A little over 10 years ago, I wrote a short story, a political satire, in homage to President George W. Bush called “Everybody’s Dictionary.” While going over it recently, I realized little had changed in the U.S. since the time of G-Dubs, and that if I tweaked it just a little here and there, I could actually make it an homage to President Donald J. Trump. How exciting, I thought!

I originally posted it on Wattpad, the leading English language short story site, a couple of years ago, and then kind of forgot about it until January 20, the day Donnie T. was inaugurated as the 45th President of the United States.

However, it wasn’t until Kellyannegate a couple of weeks ago, when the term “alternative facts” entered the lexicon of the American media, that I decided to go back to “Everybody’s Dictionary” and see if it was still relevant eight years later. And wouldn’t you know it! Plus ça change, plus c’est la même chose. (TRANS.: If you beat around a bush, you will always be trumped.)

So, to all those logophiles out there who still think semantics are important, I dedicate this updated version of the story to you.