Failure: The Price of Success 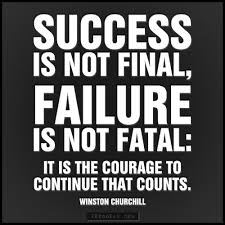 Recently, I read a thought-provoking piece in The New York Times on failure. It looked at how failure had such a different impact on people depending on the industry you worked in. For writers, as many writers themselves pointed out, it is crucial to the success of the craft.

But how does one absorb failure and not become bogged down in self-doubt and fear? It’s a good question and one which I still struggle with every day when I write and edit my own material.

For those of us who are overachievers and perfectionists (cough), failure is never an option in principle. When I completed my first book in 2000 and gave it out to friends for feedback, I was devastated to learn pretty much everyone thought it sucked the bag. Nice, I thought. You guys are all  douchebags. Whatever.

Then I penned a second book. It also received a resounding Yaaaaawwwwnnnnn. Boring!

More douchebags. Obviously. My writing was far superior than their limited intellects could handle.

So I did what Junot Díaz once said:

“In my view a writer is a writer because even when there is no hope, even when nothing you do shows any sign of promise, you keep writing anyway.”

Failure sucks. Pure and simple. It makes us second-guess ourselves, and whether it’s being rejected on a date, being fired, or staring at a computer screen as a writer and watching the stupid cursor blink over and over like a dumbass playing a cruel joke on you, it’s a necessary part of success.

Personally, I’ve been rejected by agents and publishers alike for 14 years and still I soldier on. Today, my writing is better precisely because of this rejection and failure. Will I ever be published by one of the Big Five in New York? I’m not sure. What I do know is what Teddy Roosevelt said so eloquently a century ago about this very subject, and something I believe in wholeheartedly:

It is not the critic who counts; not the man who points out how the strong man stumbles, or where the doer of deeds could have done them better. The credit belongs to the man who is actually in the arena, whose face is marred by dust and sweat and blood; who strives valiantly; who errs, who comes short again and again, because there is no effort without error and shortcoming; but who does actually strive to do the deeds; who knows great enthusiasms, the great devotions; who spends himself in a worthy cause; who at the best knows in the end the triumph of high achievement, and who at the worst, if he fails, at least fails while daring greatly, so that his place shall never be with those cold and timid souls who neither know victory nor defeat.